Everyone knows the tale of the Titanic…a doomed voyage…here is what actually happened on April 14, 1912. Murder, chaos, and the undead threaten to sink the ship faster than any iceberg.

As a nurse, Nora Ryan was prepared for the common illnesses, but what she discovers instead is an infection modern medicine has yet to name.

Head steward, Jonathan Davis was not expecting to meet Nora and he certainly wasn’t expecting to fight a deadly infection alongside her. As the first victim of this strange illness dies and passengers are rapidly becoming infected; these two strangers must find a way to stop these undead creatures from taking over the ship.

The trip home from England to America becomes hectic for the Lambert family when they overhear startling rumors from their second class stateroom. People are dying, and the dead are taking anyone they can sink their teeth into with them. Will their family make it to their destination or will they be caught in the rising tide of infection that intends to leave no living being behind?

“What happened?” Jonathan pulled her closer to help keep them both on their feet.

“Our patient died. I need to let the captain know so he can decide what to do about the body.” Nora took a deep breath to steady herself and instead inhaled Jonathan’s cologne.

“What do you suggest we do with his body?” Nora asked Captain Smith, hoping he had an idea.

Exchanging glances with Jonathan, he informed them, “I believe we should burn his body. There is no one to identify it, and if we wait until we land, the infection from him might move to some of the passengers. It’s a chance I’m not willing to take. Has anyone else been stricken?”

“It doesn’t seem to be an airborne illness. Only through the exchange of blood or saliva,” Nora added, hoping to be helpful….

“Nurse, I want you to keep me informed about our crewman or any other things that seem suspicious to you. If this is what I’m afraid it is, it will still manage to affect everyone, no matter how cautious we are in preventing it.”

“I understand, and will let you know of the slightest change in our passengers.”

“That is all I ask. Thank you so much for your service.” Tipping his hat, the captain left to return to his duties.

Jonathan passed the captain as he returned with his two roommates, Timothy and Brad.

“Okay, boys. We are going to wrap the body up tightly in the sheet so people don’t know what’s going on.”

“Here’s the stretcher. He’s all ready for you.” Nora stood back as the three men transferred the body over.

“When you get downstairs, make sure you throw him into the fire, along with the wrappings. We don’t want anything to spread.” Jonathan instructed the men.

Hurrying to open the door for them, Nora stood to the side. “Do you need me to come with you for anything?”

“Nothing we can’t handle.” Brad grinned at her, almost dropping his end of the stretcher.

Jonathan led the way through the corridors and over to the crew staircase, staying ahead to redirect anyone in their path.

“Even dead, this guy is super heavy. Wonder what he ate for dinner?” Brad asked.

“A fat man from the feel of it,” Timothy answered, laughing.

“Shh. We are supposed to keep this quiet, gentlemen.”

The door to the engine rooms kept the amount of noise contained and partitioned away from the passengers.

Concerned with how heavy it was and where they should set it down, Brad and Timothy never saw the body sit straight up until a hand landed on Timothy’s thigh.

“Bloody hell.” Timothy screamed as the infected man’s mouth latched onto his leg, its teeth tearing out a chunk of flesh. 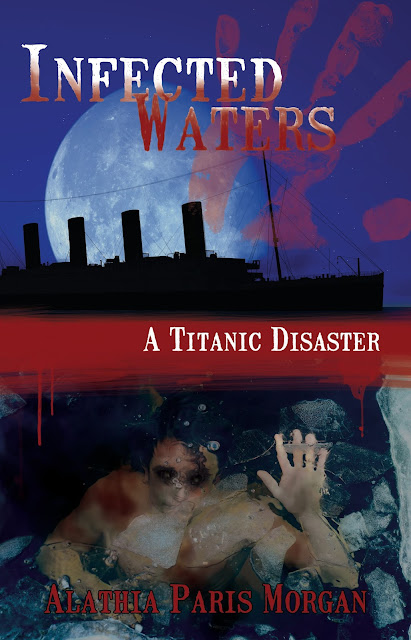 Alathia is known to those around her for having an a long time love affair/obsession with Dr.Pepper, she has asked to be buried with a can so that it never runs out in the after life. Always bossy, she uses her mothering instincts to help others and share awareness of abuse in child and domestic situations.

A B.S. in History and English gave wings to her vivid imagination in book form. A supportive and loving husband has given her the chance to make her dreams a reality. Their three daughters and three dogs keep her busy while writing is a great way for her to wind down and destress.