Take a peek inside Kristy Marie’s next release, INTERPRETER! This is a standalone Contemporary Romance packed with so many feels and hilarious moments that it can only be topped by one crazy, tension-fueled couple! See what readers are anticipating as her best book yet! Arriving on your kindle December 6th! 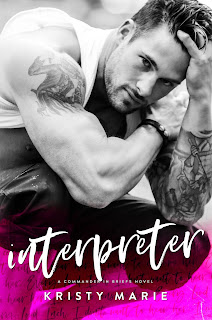 
EXCERPT:
“Well, well, Mr. Broody. It’s nice to finally meet you. I have to say, Milah hasn’t been that forthcoming about…” He motions up and down my body with a long nail, “you.”
“Oh my God, Pe!” Milah’s eyes are wide when she scans our group. “I’m so sorry. I’m Milah. Tim’s co-teacher.”
“You mean his boss,” adds Hayes, his hands signing along with his words. I make sure to look around to see if anyone saw him do it, but no one seems to care that we’re standing in the middle of the room chatting.
Milah grins. “I guess you could say that.” She doesn’t sign her words though and I wonder if she saw me do a sweep of the place. But when she shakes each of my crew’s hands and introduces Felipe, I decide she didn’t catch it. Of course she didn’t, Tim. Everyone is here trying to have a good time. No one is worrying about if we’re being looked at. They’ve all signed since we walked in which could look to outsiders like any one of us could be deaf.
“So, Felipe, do you have any grungy hallways that seem a little stripper-y?” I snap out of the signing debate when I see Theo half-sign his words to Felipe. Did I interpret that correctly? “I thought we were coming to a strip club—” Milah’s eyes narrow at me and all I can do is smile. “—and I was looking forward to some filthy romps against something that might end up with me needing an antibiotic later.” Have mercy on my soul. I interpreted it correctly. I guess I should be lucky he didn’t say worse.
“He doesn’t mean that,” I say, mostly because it’s the right thing to say. No one needs to know about Theo’s sexcapades this early into meeting him.
“Shut up, Lambros. That’s exactly what I mean. Point me to a good rug that won’t hurt her knees.” This time, Anniston pinches his side and it makes the group laugh. Whether he really means to have a romp against something filthy or just tried to break the ice between all of us, I’ll never know. Theo works in mysterious ways.

If you love:
✅ A broody, broken hero
✅ A sassy heroine
✅ A hilarious cast of characters
✅ A multicultural romance
✅ An unforgettable journey
Then you will love INTERPRETER. Add it to your TBR today!
Goodreads
https://www.goodreads.com/book/show/43838319-interpreter
Blurb:
Heartbreakingly beautiful and devastatingly annoying, Timaeus Lambros, a deaf, former military translator, has just been assigned as my co-teacher for the rest of the school year.
His stupid-hot face gets on my nerves.
So does his well-fitting jeans.
Charming and gorgeous men like him should not be teachers.
They should be locked away in a storage closet... with me.
But that’s just a teachers’ lounge fantasy with a big dreamy sigh attached.
Tim and I can never be a thing. He’s broody and closed off, while I’m the new owner of a one-way ticket back to Costa Rica, thanks to budget cuts.

But my Abuelita always said life wasn’t a fairytale. So even if Tim does have a magical tongue and a dreamy body, we still might not get a happily ever after.


After eight long years, she released her debut novel, Commander in Briefs. It was a long road, but she can honestly say, the road less traveled had the most beautiful sights.