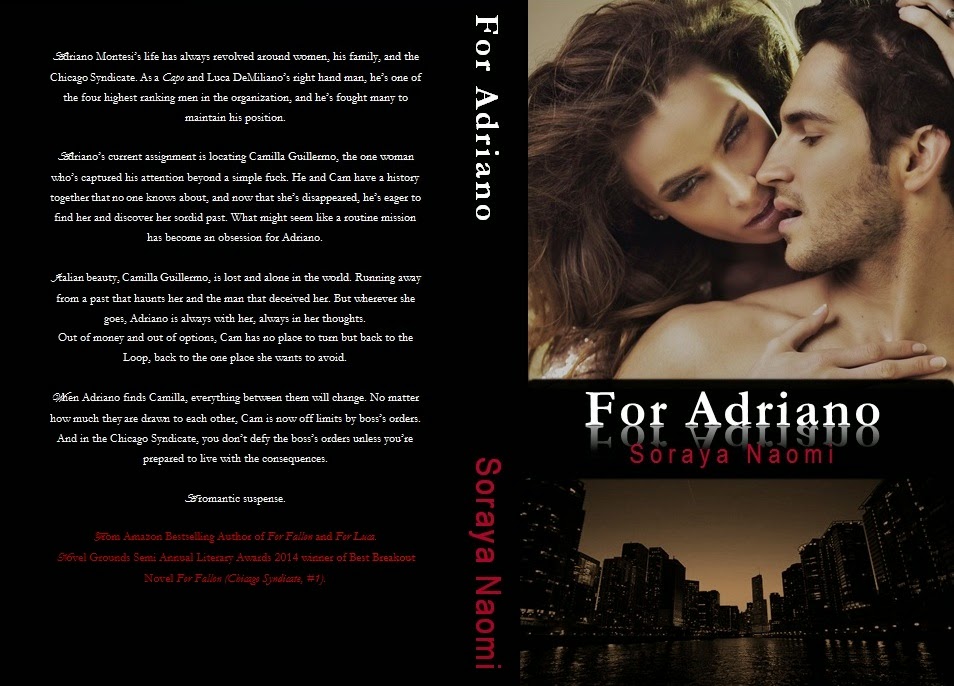 BLURB
Adriano Montesi’s life has always revolved around women, his family, and the Chicago Syndicate. As a Capo and Luca DeMiliano’s right hand man, he’s one of the four highest ranking men in the organization, and he’s fought many to maintain his position.

Adriano’s current assignment is locating Camilla Guillermo, the one woman who’s captured his attention beyond a simple fuck. He and Cam have a history together that no one knows about, and now that she’s disappeared, he’s eager to find her and discover her sordid past. What might seem like a routine mission has become an obsession for Adriano.

Italian beauty, Camilla Guillermo, is lost and alone in the world. Running away from a past that haunts her and the man that deceived her. But wherever she goes, Adriano is always with her, always in her thoughts.
Out of money and out of options, Cam has no place to turn but back to the Loop, back to the one place she wants to avoid.

When Adriano finds Camilla, everything between them will change. No matter how much they are drawn to each other, Cam is now off limits by boss’s orders. And in the Chicago Syndicate, you don’t defy the boss’s orders unless you’re prepared to live with the consequences.

EXCERPT
Adriano’s point of view
As I climb the stairs to the strip club of the Syndicate’s three-story headquarters, located alongside the North Shore of Chicago’s suburbs, I already recognize voices coming from the room at the end of the hall.
I’m greeted by Luca and James who are in the middle of the room beside the rounded burgundy sofa. I nod to both of them and fix my focus on the unknown woman with an attractive bob standing next to James. I’m usually not a fan of women with short hair, but who is this delectable creature?
James takes his cue to introduce us. “Adriano, meet Camilla. She’ll be working here at the club from now on.”
Why did he suddenly hire someone new? We’re not understaffed.
I can’t help but stare at her. My god, her legs go on forever; she’s just a bit shorter than I am, and I’m over six feet tall. I inspect her body slowly, like no one is watching, and when I reach her face, I’m pleasantly stunned that she’s challenging me with an arc of her perfectly shaped eyebrow. Her eyes are deep brown, heavily lashed, and slightly tilted up at the corners. Her cheeks are delicately boned. She looks absolutely appetizing in a tight, black knee-length dress. Sexy, yet not too revealing. In other words, she’s smokin’ hot!
“Camilla, nice to meet you.” I go old-school, take her hand in mine, and kiss her knuckles.
Luca hides an eye-roll, but I catch it and grin.
“Adriano,” she says huskily.
Her voice is hoarse. Hoarse in the sexiest way I’ve ever encountered. I didn’t expect that sensual voice to accompany this striking woman that smells like vanilla. With her, my obsession for vanilla ignited.
“Welcome to our little establishment.” Then I address James while holding on to her hand, “What will she be doing here?”
“Bartending,” James answers.
“Then I better show her the ropes.” I let the pad of my thumb swirl over her fingers, and she shivers noticeably; she’s not immune to my charms.
And I guide this interesting woman with me to the bar, which is a stainless steel and black granite area that’s open at each end and set up like a juice bar.
She speaks before we step behind it. “I can make drinks.”
Her simple statement has me confused.
“You look like you don’t believe I can tend the bar,” she elaborates.
Oh no, sweetheart, I’m not doubting your qualifications. I’m just staggered by the sex vibes you’re throwing around with that voice and those gorgeous lean legs.
I smirk while extending my hand, inviting her behind the bar. “No, I believe you.”
That was the first night I tried to get Cam into my bed. I failed that night and for over three months after and almost gave up my chase, but it was too much fun to try to capture her. I don’t even think she liked me at first.

ABOUT THE AUTHOR
I was born in South America in 1984 and raised in Europe where I presently reside with my fiancé.
I read many genres but favor intense, dark, seductive, and provocative novels where the male character loves fiercely, without remorse or boundaries. I also adore forbidden love tales and have an odd fascination with kidnapping romances. No, I don't secretly want to be kidnapped, though!
I have a passionate obsession with the written word and indulge in chocolate pastries much too often.
My debut novel For Fallon (Chicago Syndicate, #1) was released on July 26, 2014. I’m honored that For Fallon won “Best Breakout Novel 2014” in the Novel Grounds Semi Annual Literary Awards.
For more information about the novel and author:
WEBSITE – www.sorayanaomi.wordpress.com
FACEBOOK – www.facebook.com/sorayanaomi.author
TWITTER – www.twitter.com/Soraya_Naomi
INSTAGRAM – www.instagram.com/soraya_naomi
GOOGLE+ – http://tinyurl.com/lac4p5d
AMAZON AUTHOR – http://tinyurl.com/jwadol3 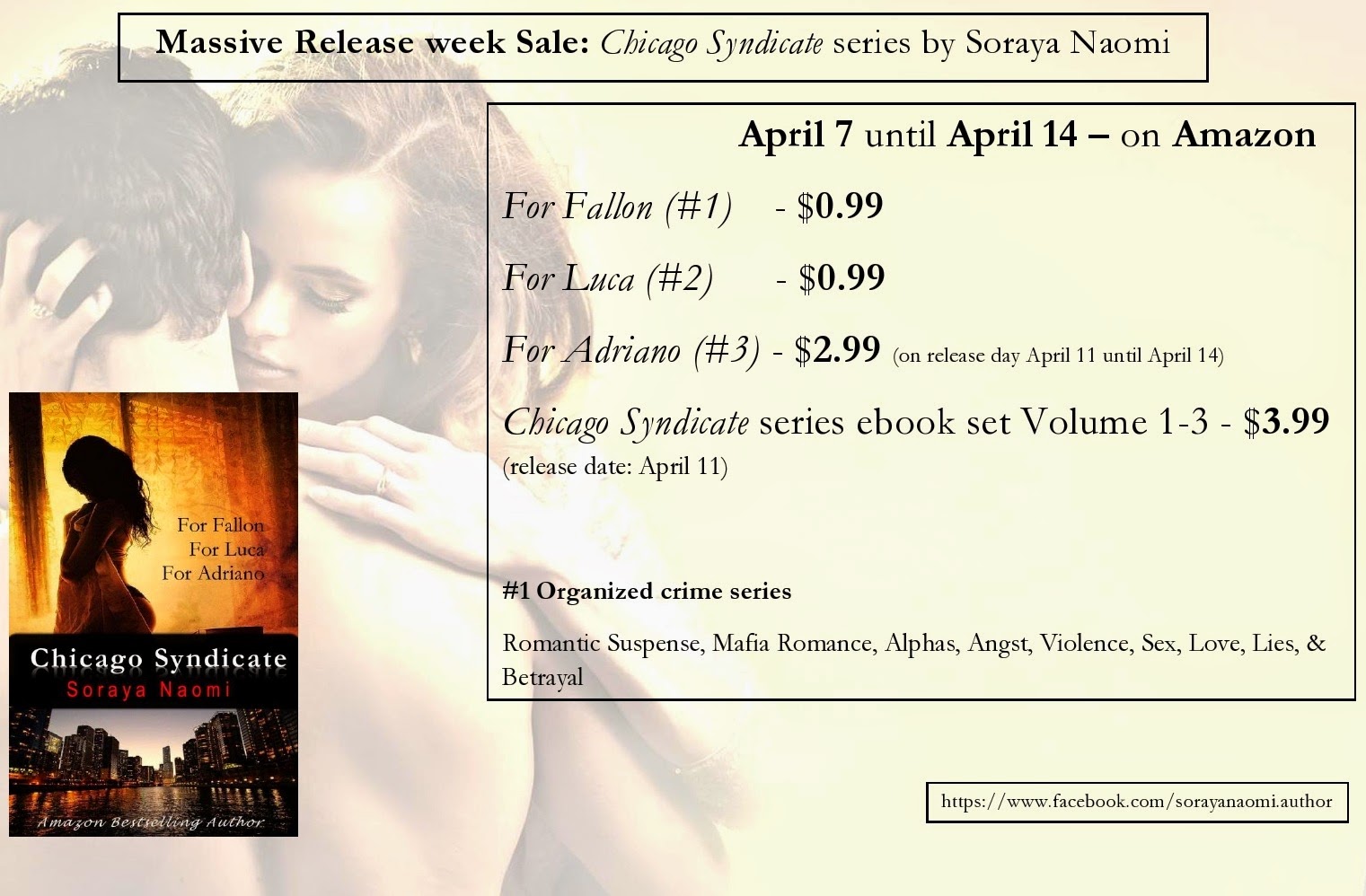